Released in conjunction with our site, Ace Records in the UK has put together a cracking package of gems cut at Cosimo Recording Studios in the 1960s: 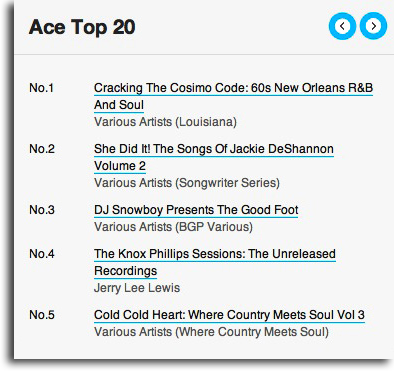 With all tracks presented in their original glorious mono, the CD shot straight to the top of the Ace Top 20 shortly after it's release.

Here's what some of our friends had to say:
"Thank you so much for the Cosimo CD, it touched me so much. Thank God for people like you that care enough to write about our music history. It feels good to know that we won't be forgotten! Much love..." - Willie West

"Cracking the Cosimo Code stands as both a worthy introduction to this great project and a worthy send-off to a great man. At the same time, Cosimo Matassa would be delighted that listeners with no awareness of this music's rich history - and no interest in discographical esoterica - will nonetheless find this album irresistibly danceable."
- Ben Sandmel, Louisiana Cultural Vistas

"What a great mix of known, unknown (to me, anyway), and half-known. Never heard that version of 'The Monkey'... I don't think I ever knew this existed. Thanks again!" - Colin Escott

"Like so much music that emerged from Southern studios in the 1960s - Muscle Shoals and Stax being obvious examples - these are sessions that radiate a sense of efficiency and good times running in unusual harmony. You can only imagine that those vibes were facilitated in no small part by Matassa himself... It's a great record, and a fitting showcase to the work of a musical technician who gave his charges the space and the confidence to express themselves so wholeheartedly." - John Mulvey, Uncut